The store will not work correctly in the case when cookies are disabled.

Fluid is pressurised by the FORCE of a piston. The piston moves in a cylinder which is sealed to prevent fluid leaking out or air entering into the system. The piston must move with little friction in the cylinder as this will have an adverse effect on the system.

There is air on one side of the piston and hydraulic brake fluid on the other side. The area of each piston is determined using the PiR2 formula. To obtain a measurement in inches from millimetres simply multiply the millimetres by 0.03937. You then divide the Diameter (D) by 2 to obtain the Radius (R) of the Piston and then calculate the piston area in square inches by using the PiR2 formula. For example:

Now that we have this figure we can start calculating other measurements. 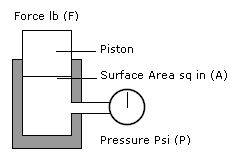 The amount of pressure depends on how much FORCE you put on the piston.

If the piston in the above system has an area of 2 in2 and the FORCE is 400lbf then the pressure is calculated using the formula as follows:

A smaller piston gives a higher pressure. If you replaced the piston with only a 1 in2 area in the same system with 400lbf of FORCE then the pressure exerted is 400 psi. Pistons can be used to multiply the FORCE in a hydraulic system. By choosing pistons with different surface areas any relationship with FORCE is possible.

When looking at the two hydraulic laws above we know that the 200 psi in our example system will act equally on all surfaces within the system. The shell of the master cylinder, the shell of the caliper and the hoses that connect them both will have 200 psi acting upon them but they cannot move. However the piston at the caliper is able to move and will have the same 200 psi acting upon it.

This is why it is important to replace the rubber hoses in your braking system with stainless steel braided. The pressure within the system acts on all surface areas of the braking system including the brake hose. This pressure when pushing outwards on a rubber hose can cause the hose to swell under heavy braking. The pressure is constant so you will still have the same pressure acting on the caliper piston BUT the amount of movement the caliper will have is reduced due to the amount of movement within the hose and also the FORCE acting upon the caliper will be reduced due to some force being used up swelling the brake hose.

As this piston has a 4 in2 surface area the FORCE it produces will be 800lbf. The area has doubled so the FORCE is doubled. 400lbf of FORCE is pushed down onto 2 in2 which then acts upon the 4 in2 surface. We must remember that only the FORCE changes in this system – the pressure remains the same at 200 psi. This is 2 in2 so with the other piston having 4 in2 the FORCE produced has twice the surface area to work upon and so twice the FORCE in lbs.

So that covers the FORCE at work in your braking system and we know that by decreasing or increasing parts of the system you can alter the FORCE produced at the caliper but that does not increase pressure. Pressure is the constant in the braking system and cannot be altered internally. If you can produce 200 psi at the master cylinder hydraulic law requires that 200 psi is produced at the caliper.

So the fitting of the smaller dash 2 hoses sold by some manufacturers makes NO difference to the pressure produced at the caliper as is commonly believed. There are no substantial benefits associated with the use of dash 2 hoses except that the manufacturer can charge you more for them. The only way to increase pressure coming out of the system is to increase the pressure going into the system. 500 psi in equals 500 psi out.